Aqualyx®, developed for the non-surgical reduction of localised fat under the skin is a gel-based aqueous solution, which dissolves fat and is biocompatible and biodegradable. 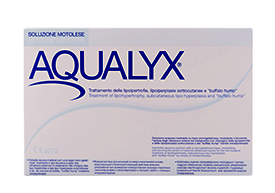 Aqualyx® works by causing the dissolution of fat cells. The body then expels the released fatty acids naturally.

Aqualyx® is the only product available for ‘Aquaplasty’ or ‘Aqualysis’ (treatment) exclusively via Healthxchange Pharmacy. What is Aqualyx?

Treatment with Aqualyx® is only available to patients from trained healthcare professionals in the UK. Find Aqualyx near you.

Areas that may be
suitable for Aqualyx:

Find out more about Aqualyx